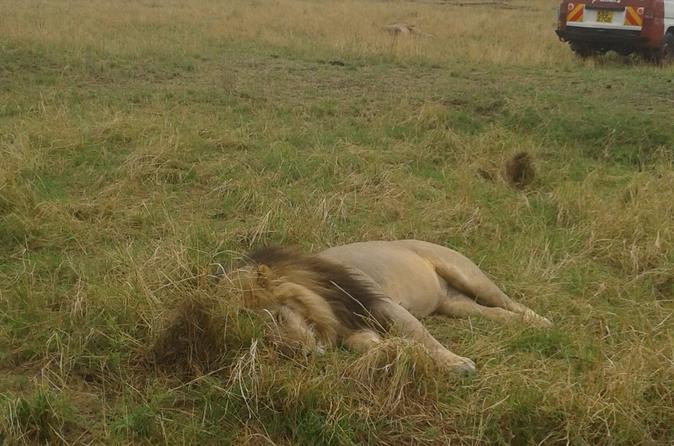 Experience both the Maasai Mara and lake Nakuru National parks at a very good friendly price.

This is a budget safari whereby there will be a maximum of 8 people in a proper safari vehicle with a pop up roof.

Day 1: Nairobi to Maasai Mara. At 8 o'clock you will be picked up from your Nairobi Hotel and commence the drive to Maasai Mara via the great rift valley view point where you will have a breathtaking view of the floor of the rift valley. Lunch will be picnic on the way. In the afternoon after you check in depart for a game drive. Dinner at lenchada Tourist Camp(www.lenchadatouristcamp.com/)

Masai Mara is regarded as the jewel of Kenya’s wildlife Viewing areas. The annual wildebeest’s migration alone involves over 1.5 million animals arriving in July and departing in November. The phenomenal wildebeest migration which is a spectacular event only seen in Maasai mara is the the wonder of the world.

Spend the full day exploring Masai Mara in search of the Big Five. You will have picnic lunches in the Reserve as you scale the Mara beauty sited at the banks of Mara river.
Optional: In the evening, Visit the local Maasai village for a Maasai cultural tour at USD 10 per person. Learn about the Maasai community and interact with the local Maasai people.
A balloon safari at USD 400 per person(optional) can  be organised early morning on this day then proceed with the normal program. It is in the Mara that perhaps the most spectacular event of the natural world takes place: the great migration. This is the annual migration of millions of wildebeest and zebra from the Serengeti (in Tanzania) in search of water and pasture. Following on their heels are the predators of the savanna – lions, cheetahs, jackals, hyenas and vultures.

You will enjoy the last early morning game drive in Mara Reserve followed by breakfast. Thereafter commence drive to Nakuru. Overnight is at Mat fam Lanet(www.lanetmatfamresort.co.ke/)

Day 4 : Nakuru to Nairobi
You will have an early breakfast and depart by 7am to straight to the park. Its a small park with magnificent, rare white rhinos which form part of the Big five animals. There is also a possibility to see the pink flamingos . The game drive lasts 3 hours, after which you depart on a 3-hour drive back to Nairobi.You will be dropped to your hotel within Nairobi.

Experience both the Maasai Mara and lake Nakuru National parks at a very good friendly price.