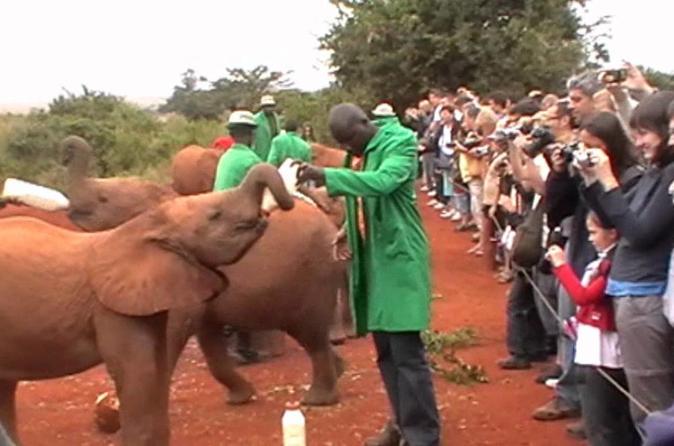 A Nairobi excursion where you spend a wonderful 6-hours with giraffes and baby elephants. Visit the Giraffe Manor, the The David Sheldrick Wildlife Trust: A Haven for Elephants and Rhinos.

Be picked up in 9.00 Am morning and driven to the animal orphanage, located in a secluded area of the Nairobi National Park, where orphaned baby elephants and other animals are taken care of by a dedicated team of conservationists. The drive takes approximately 45-minutes and the orphanage is open the public one hour a day. It is run by Daphne Sheldrick, the wife of the late famous Naturalist, David William Sheldrick, the founder Warden of Tsavo East National Park in Kenya.

At 11:00am, the baby animals are brought from the national park for a mud-bath at the orphanage, where for an hour you can see them within good distance. You may not feed the animals but will get a chance to view the handlers feeding them. The private session is strictly between 3:00pm and 4:00pm each day and allows you to see the animals in private. This requires advance booking.

In addition to the viewing, there is a keeper who will give a talk about the elephants, where they came from, how they are getting on, and how some of the previous orphans are progressing. The orphanage also takes in rhinos, so if you are lucky you will get the chance to see a young rhino.

The giraffe center is a wonderful and refreshing experience to enjoy as an excursion while in Nairobi.

The African Fund for Endangered Wildlife Kenya (A.F.E.W.) also known as the Giraffe Center is a non-governmental, non-profit organization founded by Betty and Jock Leslie-Melville in 1979. This was in a bid to save the endangered Rothschild Giraffe, which had lost its natural habitat in Western Kenya to agriculture and there were only 130 left in the wild. Funds were raised and four herds were moved to four Parks namely Lake Nakuru National Park, Mwea Game Reserve, Ruma National Park and Nasalot Game Reserve.

Today the Rothschild Giraffe population in Kenya is about 500. The center today also acts as a place for free environmental education to the Kenyan youth, Conservation of endangered species and Support of other conservation projects all over Kenya.

Be transferred back to your accommodations in Nairobi at tour's end.

A Nairobi excursion where you spend a wonderful 6-hours with giraffes and baby elephants. Visit the Giraffe Manor, the The David Sheldrick Wildlife Trust: A Haven for Elephants and Rhinos.