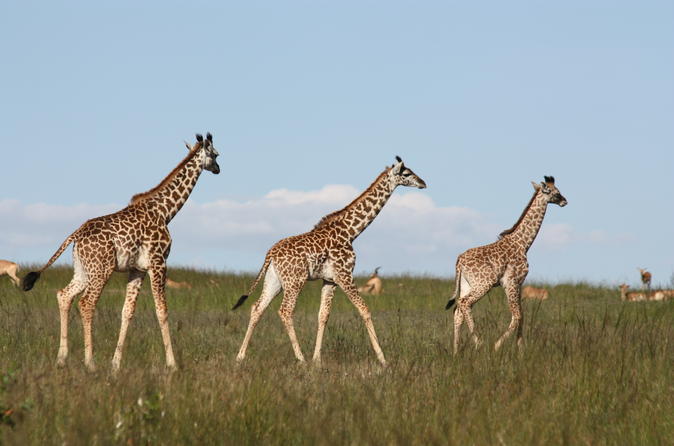 Enjoy the best of what Nairobi has to offer and embark on a 5-hour guided tour to the Karen Blixen Museum, the Giraffe Center, and a city tour. Come see all of these amazing places at once.

Start the day with a pickup from your hotel in the morning and embark on a city tour of Nairobi, the capital of Kenya, boasting one of the finest climates in the world. On the tour you will pass by Nairobi landmarks including the view point, Law Courts, Parliament building and the uniquely shaped Kenyatta International Conference Centre,

From there, proceed to the Giraffe Centre, an elevated treetop area where you may meet the giraffes, quite literally face-to-face. Established by Jock and Betty Leslie-Melville in 1979 as a sanctuary for the rare Rothschild giraffe, the center has a feeding platform with pelleted food. Here a resident expert also presents a private briefing on the center’s work to save the endangered giraffe.

After, visit the Karen Blixen Museum. Its history dates back to 1914, during the First World War, with the arrival of Karen Blixen from Denmark. At the foot of Ngong Hills, Karen Blixen established herself as a farmer. After her departure in 1931, the suburbs retained the commemorative home of Karen. The Danish government donated the house, and the surrounding land to Kenya after independence. The house was restored by the Danish government, and was used during the filming of "Out of Africa" which immortalized Karen Blixen's book by the same name. The museum was opened to the public in 1986.

Lastly, visit the Kazuri beads factory. Kazuri, meaning 'small and beautiful' in Swahili, began in 1975 as a tiny workshop experimenting on making handmade beads. The factory is located in what used to be part of the Karen Blixen Estate which has first quality beads as souvenirs. Drop off at the hotel.

Enjoy the best of what Nairobi has to offer and embark on a 5-hour guided tour to the Karen Blixen Museum, the Giraffe Center, and a city tour. Come see all of these amazing places at once.